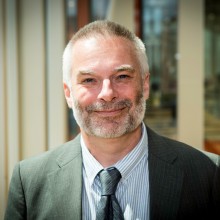 A graduate of Cambridge and Oxford (D. Phil. Experimental Particle Physics), he has played a leading role in particle physics both in Europe and the United States. Womersley worked at the Florida State University and Fermilab before becoming a scientific advisor to the Department of Energy in the US. He returned to the UK in 2005 to become Director of the Particle Physics Department at the STFC Rutherford Appleton Laboratory at a time when it was building and delivering vital components to CERN's Large Hadron Collider.

In 2007, Womersley took on a broader role in STFC, managing the Science Programmes Office which oversees the STFC's science and technology strategy, science operations and planning, including the STFC's processes for peer review and research grants, as well as STFC's programmes in education, training and public outreach.

Womersley's scientific achievements include his time as spokesperson for Fermilab's D-Zero experiment, when he coordinated analysis and publications, including placing the first experimental particle physics paper in Nature for more than 70 years. He was the lead author of numerous scientific papers analysing the properties of high energy particle collisions and searching for the Higgs Boson and other new physics phenomena. He has 288 articles published in refereed journals, including the co-discovery of the top quark in 1995.