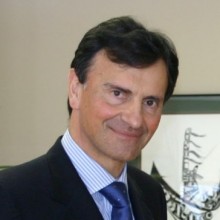 Andrea joined the Foreign Service in 1975 as a career diplomat. From 1978 to 1987 he served in three posts abroad: Maputo, Mozambique; Buenos Aires, Argentina; Islamabad, Pakistan. Returning to the ministry in Rome in 1987, he was Director of the budget and planning office at the Directorate General for Development Cooperation.

After four years of working with Official Development Aid programs, he moved to the Italian Permanent Mission to the UN in Geneva, where he was placed in charge of trade policy. As deputy Italian Representative to the GATT, he was deeply involved in the conclusion of the Uruguay Round of multilateral negotiations and later in the development of the WTO, whose first Director General was an Italian citizen.

He then served four years as the Consul General in Buenos Aires, the largest Italian Consulate in the world, before returning to Rome.

In January 2006, Andreas was appointed the Italian Representative and Ambassador to the Political and Security Committee (COPS) of the EU in Brussels, where he handled foreign policy, national defense and security issues. He helped define the EU response to the Lebanon crises in the summer of 2006, the Kosovo independence, the 2008 conflict in Georgia, and the Iran Nuclear Program.

As the Italian Ambassador to Canada, Andrea worked to enhance bilateral relations and to increase consultations on foreign policy issues. He set out to make Science Technology and Innovation a key sector or bilateral cooperation and connected Canadian and Italian Research Centers by organizing an annual conference on STI topics. Under his mandate, several agreements have been sealed between Canadian and Italian research institutions.

In January 2013, Andrea was appointed Director General for Economic, Cultural and STI Affairs. During his tenure, he aided in the implementation of policy actions for a more active presence on international markets of Italian enterprises, fostering a closer link between business and STI activities around the world. Through his work, he reshaped the network of the Italian Scientific Attaches serving in the Embassies.